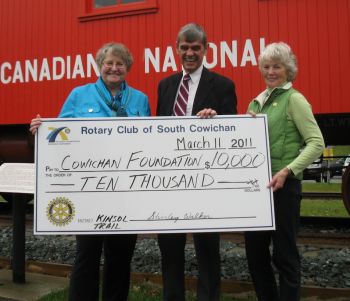 South Cowichan members committing up to $50,000 to project

Duncan, BC – Wouldn’t it be cool to go down in history as the person who drove the Last Spike on the rehabilitated Kinsol Trestle?

Well, that’s what members of the South Cowichan Rotary Club are offering the lucky grand prize winner of the Kinsol Trestle Lottery which runs until April 27.

The Kinsol Trestle Lottery is part of a generous $50,000 cash and in-kind contribution the South Cowichan Rotary club is making to the Kinsol Trestle fundraising campaign. In addition to the proceeds from the lottery, Rotary is giving a cash donation of $10,000, which is money raised by the club with the support of major fundraising sponsor South Cowichan Eyecare over the last two years. To round out their commitment, Rotary members from South Cowichan and Duncan clubs will supply their expertise and labour to source materials and help construct a trail on the north side of the Trestle.

The 400 metre visitors’ trail will include three viewing platforms and will wind through the Trestle structure down to the Koksilah River, offering spectacular views of the Kinsol Trestle from several vantage points.

“I can’t say enough about the support and enthusiasm we’ve received from the South Cowichan Rotary members,” Jack Peake, chair of the Save the Historic Kinsol Trestle fundraising campaign, Cowichan Foundation. “The chance to be part of history by driving the “last spike” and to be the first to walk across the Trestle is going to be a fantastic thrill for one lucky donor. Thank you South Cowichan Rotary!”

“We decided a long time ago that this project was one that we wanted to be a part of because of its importance to our community,” said club president Shirley Walker. “The Kinsol Trestle project is an important legacy for the Rotary Club of South Cowichan. Our members live and work in the community and take great pride in helping to make this and other community projects a reality.”

“We are excited to work with the South Cowichan Rotary club on the finishing touches of the Kinsol project,” said Gerry Giles, chair of the Cowichan Valley Regional District, which is managing the $7.4 million Kinsol Trestle Rehabilitation. “With their support and the continuing efforts of the local fundraising drive, the rehabilitated Kinsol Trestle will be ready for the world to come and visit when it officially reopens early this summer.”

The Kinsol Trestle Lottery gives ticket-holders a chance to drive the last spike into the Kinsol Trestle at the official reopening ceremonies planned for June. In addition, the lottery winner and three friends will be the first people to cross the new structure, spend a free night at the Whistle Stop B&B and enjoy lunch at the Merridale Estate Cidery. Second prize is a two day trip for two on the Rocky Mountaineer.

Core rehabilitation work on the Trestle will wrap up at the end of March, but construction activities will continue on the site until the official reopening. Finishing work includes landscaping, the Rotary pathway, viewing platforms, heritage signage and donor recognition wall.

Just over $200,000 remains to be raised from the local community to ensure that all the final project work is completed.

If you would like to be part of this incredible project, donations can be made online at www.kinsol.ca, by calling 250-709-1087, or in person at 135 Third Street in Duncan.

For more information about the Kinsol Trestle Lottery and for Rotary Lottery ticket information, please visit www.kinsoltrestlelottery.info or call John Thomas at 250-881-6351.